One amazing published work that we have come across having references to bezoar stones or mustikas, is Albertus Seba's "Cabinet of Natural Curiosities." This massive tome is published by Tachen and is a reproduction of an 18th century four-volume work entitled, "Loccupletissimi Rerum Thesauri Accurata Descripto." The original coloured copy of Seba's work lies in Koninklijke Biblioteek, The Hague. The work consists of illustrations done on 446 copper-plates of creatures, exotic plants, insects, sea-shells and stones from around the world. The illustrations are based on Seba's amazing collection of these zoolological, botanical and mineral specimens.  In those days in Europe, collections such as this were referred to as "Kunskammern"--"Cabinet of Curiosities"--which later evolved into our modern museums. Princes and members of royalty were greatly involved in the collection of the curiosities of Nature, scientific instruments and devices--so were the scientists and doctors of the day of which Albert Seba (1665-1736) was one of the foremost.

This article is not a biography of Seba, rather it is a brief review of the illustrated tables in his book dealing with bezoar stones. Concerning the latter, the modern edition has this to say in the Notes section:

"Since ancient times, stones taken from particular animals were considered to possess magickal and medical powers. In Seba's day bezoars were extraordinary popular. These stones formed from hairs that had accumulated and gummed together in the stomachs of ruminants. In a broader sense other stones taken from animals are likewise termed bezoars."

"In addition, stones were keenly sought that were reputed to have come from the heads of snakes, toads, etc., or even the heads of dragons. These stones were also attributed with truly magical powers since ancient times."

It is interesting to note that a good amount of Seba's bezoar stones and other items in his collection comes from the Indonesian archipelago.

Quite a few of the bezoar stones or mustika pearls as depicted in Seba's work are recognizable and we do offer them in the Magickal Pearls section. The reader may find the information below of great interest.

The illustration (above-left) from Seba's collection depicts a bezoar stone set into a pendant. Though it does not state explicitly in the table or text, this is probably a porcupine pearl as it appears beside the creature in the table (Table 51). Above right and center are some porcupine pearls in our collection--the ones on the right are more egg-shaped (tapering at one end). Bezoar stones, even from the same animal species, may have various forms, textures and colours. Not all are formed in the stomache, some stones are from the liver, kidneys, brain and various other organs--some are even protrusions or growths from the skin like the eye-brow pearls of tigers or wildboars.

Above are assorted bezoar stones--we feel that these illustrations do not reveal the true exquisiteness of the pearls. Comparison with the mustika pearls in our "Magickal Pearls" section would give the reader an idea of the uniqueness, and often beauty of the pearls. The large pearl shown above-right is a hippopotamus bezoar stone. Pearls are of various shapes, textures, colors and sizes as shown. Not all of the pearls depicted in the tables are given their origin.

Number 1 and 2 in the plate above are crocodile pearls. Compare these with the ones below--the one on the right has been cleansed/washed. These pearls in their natural state are quite unique with their markings--the latter are often "embossed." Once tumbled/polished they do lose their unusual appearances which some collectors prize highly. Tumbled bezoar stones may resemble ordinary granite, marble or other mineral stones. What makes these bezoar stones astonishing, magickal and "priceless," however, are their origin, richness in pranic energies and association with archetypal forces.

Number 3 in the illustration is a deer pearl. Below are some of the deer pearls in our collection :

Numbers 5--9 are all described as pig bezoar stones, or stones from porcupines--Seba seems to be confused on this point. We are inclined to believe that they are wild-boar pearls. Compare with the ones here :

The illustrations below show another selection of the "pig/porcupine" bezoar stones.

A sea turtle pearl is depicted in the previous table as illustration number 4. We have a similar sort but these comes from tortoises. See below. 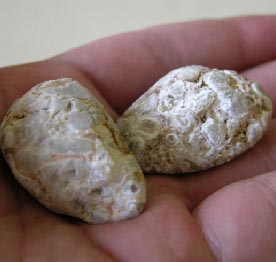 The pearls and bezoar stones of animals and plants have a magickal quality to them and this is confirmed by the experiences of many collectors and those who wear the pearls on their person or apply their virtues (through attunement) on a daily basis. Just by holding these stones their pranic energies can sometimes be felt--especially if one has some degree of psychic sensitivity. Holding any bezoarstone at their two ends with the thumb and index finger--one in each hand--and posing them crosswise in respect to each other and moving them about--a magnetic force can often be sensed. This sensation could be the result of the energies of the pearls or they could be the result of the amplified energies emanating from the fingers and thumbs. 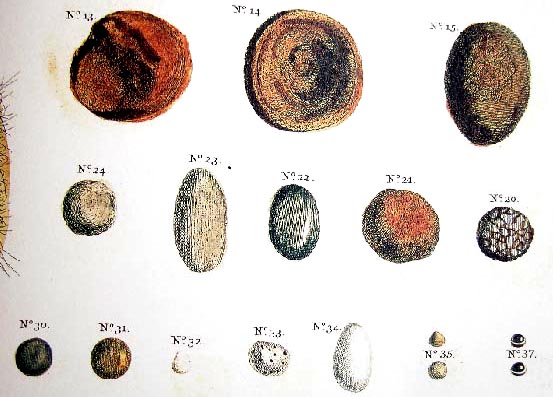 In the plate above, stones No. 20 and 23 are described as snake stones; No. 24 as a dragon-lizard stone (Lapis Dracontias); No.30--32 as toad pearls; No.33, the spotted one, as a stone from a cockeral. No. 35 are said to be spider stones. We have many snake and viper bezoar stones in our collection and they do resemble the ones above. Compare number 22 and 20 with the ones below : 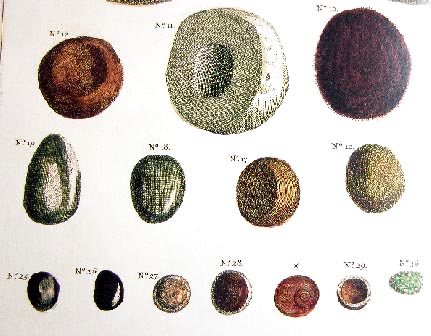