Magickal mustika pearls/bezoar stones with their innate spiritual power and force are sacred items that enhance the auric and spiritual atmospheric quality of shrines and altars. They attract to themselves spiritual intelligences and beneficent cosmic rays that bless the home. With the presence of these magickal pearls, shrines and altars are not just simple sacred places in the home, they are transformed into power-spots that the devotee can seek refuge for empowerment, inspiration and regeneration at all levels. As they contain pranic energies, cosmic and geophysical forces accumulated and developed by biological-systems (animals, plants) and etheric beings/environmental events, mustika pearls--whether in a crystalline or opaque form--the site where they are installed becomes a strong focus for divine planetary and cosmic beings, not to mention positive "nature-spirits." Magickal mustika pearls are spiritual tools and they represent the cintamani--the wish-fulfilling jewel in the esoteric aspects of Buddhism. Snake and dragon pearls in particular, are the treasures of the Naga beings, the Draconic Lords--the preservers of the dharma and esoteric doctrine of the Ages. To paraphrase a biblical text, when two or more pearls are gathered together for a certain spiritual objective, there the supreme intelligence will create a focus and appoint or re-appoint spiritual guardians to oversee their preservation and their harmonious radiations all over the site of their installation, even extending their influence to miles around. The physical keeper of the pearls within shrines play an important role in this spiritual mission--it goes beyond in importance the simple burial of crystals in a lattice-grid around the world. The many types of mustika pearls and their inherent colors attract stronger manifestations of the 12 Cosmic Rays directed to planetary-streams by the Solar Logos--in a shrine, they are of vital importance.

Altars, where magickal ceremonial and shamanic works are conducted, can be powerful when enhanced with the presences of mustika pearls. They help the shaman and magickal operator to attune, tap and access metaphysical forces conducive to successful ritualistic work and mystical celebrations.

The configuration and placement of the pearls on an altar/shrine may follow any harmonious design that Nature has created, whether it is laid at the points of a two-dimensional geometrical shape, such as the 4 points of a square, the points of a triangle, pentagon, etc. Complex designs may be employed such as the ancient "Flower-of-Life," special designs of magickal sigils, and even the constellations such as the Pleiades, Andromeda and others--the complex designs are certainly more powerful. Every design has its own particular power and force and corresponds to celestial and cosmic realities and spiritual intelligences of which they invoke into the physical sphere. Magickal mustika pearls may be laid-out in a configuration as in the above or placed in a special "treasure-vase" which is then installed in a prominent position on one's shrine.

Shrines can be of any tradition, whether it be Hindu, Buddhist, Christian, New Age, Pagan, etc--magickal pearls will enhance shrines of any belief-system. Magickal mustika pearls, whether they are gem-like or opaque, may be individually meditated with to attune to spiritual intelligences and to one's higher consciousness. Many icons and statues of the old Hindu-Buddhist kingdoms of the island of Java show deities, kings and spiritual practitioners holding these mystical, mustika pearls in their hands as tools of power.

Mustika pearls in a shrine accentuate and amplify the energies of the heart as it radiates out to deity in devotional sessions of prayer. As incense-smoke is believed to carry prayers to the gods, the accumulated and combined power of magickal pearls in a shrine assists in the building of the form of one's prayer at metaphysical levels so that it acquires a clear, distinct, and strong definition easily intercepted and registered in the consciousness of the spiritual, invisible workers of the Cosmos. The more power a shrine possesses, the more effective it becomes as a tower of communication between the higher and lower planes, between the consciousness of a life-stream and that of its master. The vibrational-frequency of one's home is raised with a mustika-shrine, and negative-energies that are magnets and sources for catastrophic problems and occurrences in one's home are neutralized.

Below we present some examples of shrines enhanced with mustikas belonging to a certain spiritual Buddhist follower and devotee. Their combined power with consecrated religious icons can readily be sensed. The first photo shows assorted types of magickal mustika pearls in a shrine dedicated to the Buddha. The second photo is a special shrine consecrated to the Naga Tantric Lords--the pearls in the shrine are dragon pearls and crowns. The photos are displayed with the kind permission of their owner. 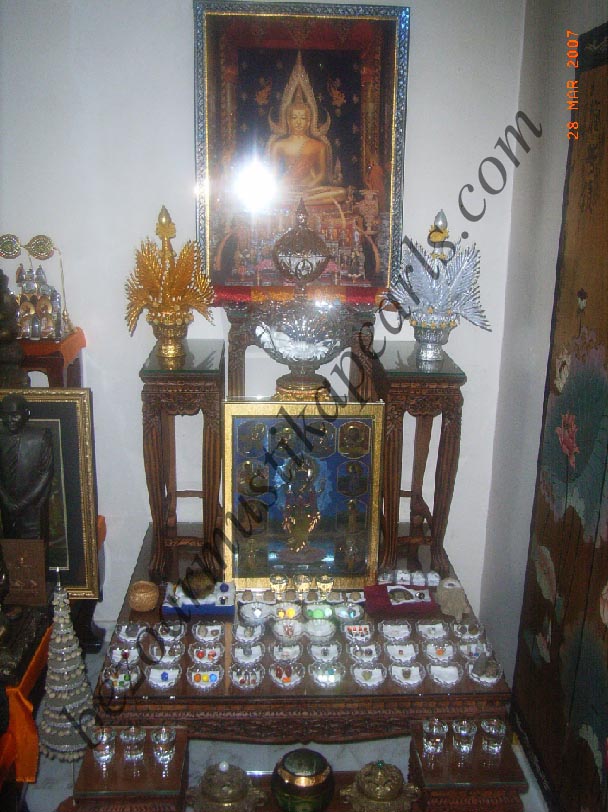 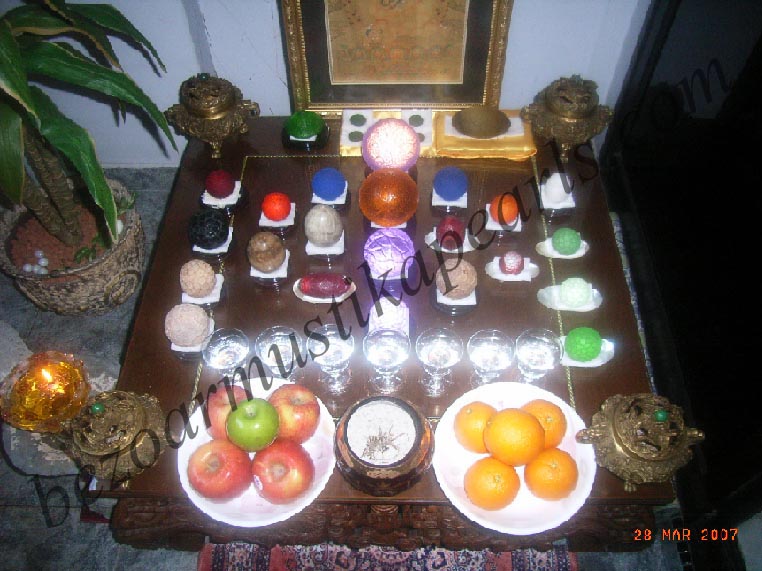